Missionaries to Russia and Eastern Europe 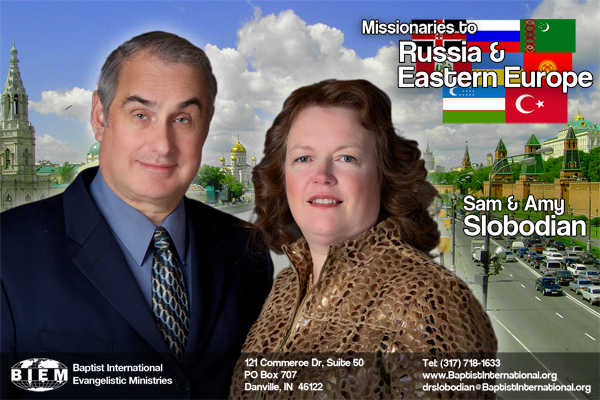 Sam Slobodian was born on May 1, 1954 to Ukrainian missionaries, Peter and Mary Slobodian, in Saenz Pena, Argentina.  Although he had come to the United States at the age of three, he did not have a real introduction to the English language until his first day of kindergarten.  As young children do, Sam learned the language quickly and one of his more vivid memories of those days was the time his father came home with a small green AM radio.  The idea was that somehow the knowledge of the English language would be imparted to the immigrant family as they huddled around the radio and listened to it in their small but very clean fourth-floor apartment, located in a run-down neighborhood of Minneapolis, Minnesota. Childhood for Sam and his sisters, Ann and Debbie, was quite normal and saturated with church activities since their parents began establishing Ukrainian and Russian Baptist churches to reach the Slavic population of Minneapolis while they both were studying at University of Northwestern – St. Paul and Central Baptist Theological Seminary.

When Sam was ten, he began to do some serious thinking after his Daily Vacation Bible School teacher asked each boy in the class to give not only the date of his birth but also the date he was born again, his spiritual birthday.  Having been raised in a preacher’s home and having heard the Gospel preached continually, Sam reasoned that he must have been saved at some point, even if he could remember neither the date nor the circumstances surrounding his decision.  However, the Holy Spirit soon convicted Sam that the reason he could not remember anything about this event was that it had never happened!  And so by the end of the week Sam received Christ as his personal Savior and wrote the date down in his Bible:  June 24, 1964.

When Sam was twelve, his family moved to Chicago, Illinois. Having completed their studies in Minneapolis, Sam’s parents were drawn to Chicago by the opportunity of ministering to the huge Slavic population of the city.  Though he was not thrilled with spending Saturdays in a Ukrainian grammar school, looking back it seems that even in those days God was preparing Sam for his future ministry.  As a dedicated Christian young man growing up in Chicago, Sam was active in church and youth activities and had an effective witness for Christ in addition to always managing to find employment.  Even though Sam earned academic honors in high school, being named an Illinois State Scholar, his main interest was trumpet, which he hoped to pursue professionally.  Sam became a serious musician and eventually was recognized as one of the outstanding high school musicians of the city.

As a senior in high school, Sam began to struggle with a call to preach.  After the Lord dealt with Sam through the Word and some specific circumstances, Sam surrendered for full-time Christian service.  As a result, he did not audition for any of the talent scholarships available from many major universities. One day the band director called Sam aside and told him the exciting news that he had been offered a talent scholarship that had no audition requirement; others and his reputation had spoken for Sam.  Indeed, the document was on his desk, and it had only to be accepted.  When Sam responded by saying he was planning on the ministry, the director replied, “Sam, that’s wonderful. I’m not even going to try to talk you out of that!”

After high school, Sam served as the youth pastor for East Maine Baptist Church in Glenview, a northwest suburb of Chicago.  The youth group multiplied under his ministry, and he involved many of the youth in the soul winning and bus ministries, starting several new bus routes  During this time, Sam attended Northeastern Illinois University, where he earned a bachelor’s degree.  Feeling the need for theological training and preparation, Sam resigned the youth ministry at East Maine in order to attend Central Baptist Theological Seminary, where he earned a Master of Divinity.  While a student there, Sam served as the first assistant pastor of the Valley Baptist Church in Golden Valley, Minnesota, where he developed the youth ministry into an extremely active program featuring camps, retreats, and cross-country bus trips.  Eventually brother Sam earned a Doctor of Missiology Degree from Trinity Evangelical Divinity School in Deerfield, Illinois.

While at Central Baptist Seminary, Sam met Amy Lindner, whose family attended Fourth Baptist Church, which housed the seminary. Amy, too, had grown up in a Christian home, where she was saved at the age of 10 as a result of evangelistic meetings in her home church in Littleton, Colorado. Amy attended Pillsbury Baptist Bible College, and after they were married she completed her education at Hyles-Anderson College, where she earned a bachelor’s degree in elementary education. Amy and Sam were married on June 6, 1977.  After Sam’s graduation from seminary, they immediately moved to Chicago, where Sam had been called as pastor of Southside Baptist Church of Chicago.

Sam and Amy devoted themselves completely to the inner-city work and God blessed with a harvest of souls and a wonderful congregation of loving people.  After three fruitful years, Sam led the church in a move to the southwest suburb of Oak Lawn, where the church had already started a Christian day school.  This proved to be an excellent move for the church and the school soon numbered over 300 students.

In 1982 Sam became increasingly burdened and challenged by the ministry (Baptist International Evangelistic Ministries- BIEM) that he and his father had established the previous year to reach behind the Iron Curtain. This burden and challenge continued to grow to the point where it was evident that this was the calling of God to leave the pastorate in order to serve as a missionary with BIEM reaching Russia and Eastern Europe.

In 1990 dramatic changes came to the ministry of BIEM with the advent of glasnost and perestroika in the Soviet Union. The collapse of Communism resulted in many new opportunities for ministry in Russia and led Sam and Amy to consider moving there. Discussing the matter with BIEM’s board and with others with longtime involvement with the Slobodians and BIEM, both in Russia and the West, helped Sam conclude that they would be most effective operating from the United States. Today Sam serves as president of BIEM, and Amy works in the ministry’s office. BIEM specializes in Russia and Eastern Europe, where the mission has planted numerous churches by supporting, training, and equipping nationals. BIEM also distributes Bibles and Gospel literature; maintains a seminary in Kyiv, Ukraine; translates and prints discipleship and pastoral training materials; conducts evangelistic outreach ministries; sponsors Christian summer camps for children and youth; provides material aid; and helps new congregations to build churches.

In 1993 the Slobodian family moved to Indianapolis, Indiana, to establish a new office for BIEM. God has greatly blessed this move and the ministry has steadily expanded. The Slobodians are members of Mt Tabor Baptist Church of Lebanon, Indiana, and have 5 children: Sarah, Susan, Steven, Sharon, and Stephanie. Susan married Mat Harvey in 2007; Sarah married Nathan Crouch in 2007; Stephanie married Aaron Anger in 2011; and Sharon married Ashton Brandyberry in 2012.